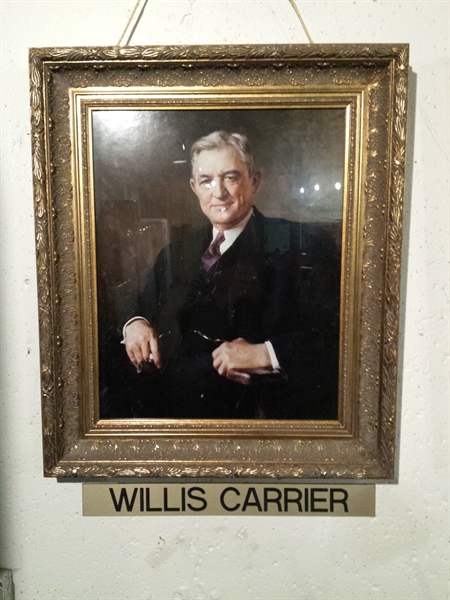 Willis Carrier is known as the Father of Air Conditioning. He also invented the psychrometric chart. It was a result of his research studying the effects of heat and humidity on heat and cooling comfort. Carrier was renowned for his great powers of concentration. The late Ed Bottum of Refrigeration Research remembered a luncheon meeting with Mr. Carrier where he enthusiastically explained the science of air and water vapor mixtures. Carrier became so engrossed in his subject that he completely forgot to eat his lunch.

Until 1924, air conditioning was used only in industrial processes. Then, Carrier introduced air conditioning to the J.L. Hudson department store in Detroit. It was a big hit with bargain hunters rubbing shoulders during the hot summer months. It made trying on dresses in the formerly stuffy dressing rooms during the summer a pleasure. But, it was the movie houses that benefitted most. They went from oppressive suffocating hot boxes to cool refuges from the heat during the summer months thanks to Carrier’s centrifugal refrigerating machines.

Grauman’s Metropolitan Theatre is known as the birthplace of theatre air conditioning. It slightly predates Carrier’s models and used carbon dioxide as the refrigerant, a refrigerant which is finding favor again today. But, it was Carrier’s first big theatre installation which garnered the most attention. Carrier engineers were really sweating it out when the New York City safety chief informed them that the refrigerant that they planned to use, dielene, was not approved by the city. No amount of test data could convince him until Carrier staged an impromptu experiment right in the safety chief’s office. Carrier ignited a small container of dielene to the great consternation of the chief. But, as the dielene slowly burned down without a hint of volatility, he granted the permit under the condition that Carrier would not visit him again to pull such a stunt.

The engineers stayed up all night previous to opening night to get the system ready. Their hard work paid off when the curtain went up. The ladies put away their fans and the actors performed in comfort. Air Conditioning was now the talk of Broadway.

We would like to talk about the many receivers and suction accumulators we make for Carrier and other manufacturers. See our catalog or contact us directly for more information.