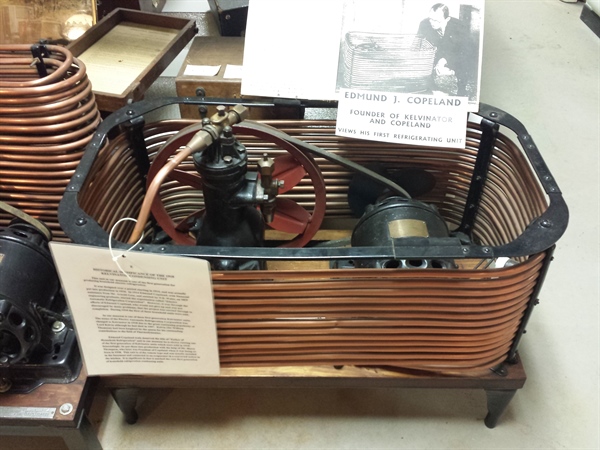 Perhaps Ralphie was on to something. If the reason your tongue freezes to a cold metal pole in winter due to the high thermal conductivity of steel could be exploited to provide simple refrigeration in cold climates, then we truly could sell refrigeration to the native inhabitants of the far north as a way of protecting seal meat from marauding wolves and desperate polar bears due to the retracting ice sheet. Imagine merely extending a copper tube from inside the cabinet to the cold outside air to conduct the heat away. All that would be needed was a temperature difference.

The first domestic refrigerators were designed in this fashion only they used a refrigerant like SO2 to conduct the heat in their heat pipes. The condensing unit for the refrigerator was placed remote from the cabinet, like shown in this depiction of an early Kelvinator refrigerator, similar to our current air conditioners. As motors and compressors became more compact, it became possible to include the condensing unit as part of the cabinet. At first, it was placed on top of the cabinet as shown on these two GE “Monitor Top” refrigerators. The second model with the condenser resembling a large ball prevailed over the earlier model because it was much easier to keep clean than the model with the exposed coil which became a dust and dirt magnet.

A copper tube extending outside the conditioned space may be all that would be needed to keep a beer cooler cold in a plush fishing shanty. The thoughts one considers while pondering an idle *tip up.

Next chance try pondering our new 2015 Refrigeration Parts Catalog. Look for Refrigeration Research at the AHR show in Chicago, booth #6122.