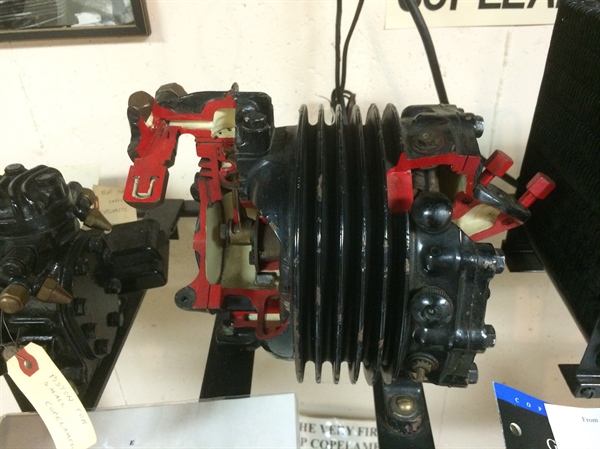 The Copeland “Pollywog” compressor is an example of one of the first semi-hermetic compressors, the forerunner of the Copelametic, the World’s most successful semi-hermetic. The original cut away model of the Pollywog shown in the photo was built by Copeland around 1931. At a trade show, one of these compressors was displayed running in a tub of water with a frosted tube above reading “Copeland”. The terminal plugs glistened like pollywog’s eyes under the water. So, the compressor was nicknamed the “Pollywog”.

Another of these compressors was displayed running in a household refrigerator. At that time almost all compressors were open drive so the response of the visitors was overwhelming. The sales department insisted on immediate production. However, Engineering warned that it needed more field testing. When management decided to put the “Pollywog” into production anyway, the Chief Engineer resigned to go to another company.

After a few months, the refrigerators using this compressor started coming back and this problem along with the Great Depression sent Copeland into bankruptcy in late 1932. This disaster confirmed the importance of adequate field testing before production.

As a young engineer at Copeland, Ed Bottum (later founder of Refrigeration Research) discovered one of three things caused the field failures. First they replaced the cloth winding insulation with glyptal insulated windings, then they replaced the porcelain enamel insulated electrical terminals with neoprene insulation and lastly they changed to a reed type valve which improved the efficiency. The new compressor, the Copelametic, became the World’s most successful semi-hermetic compressor.