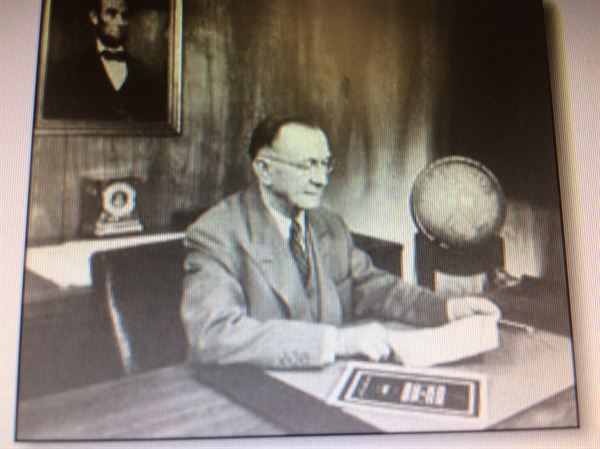 Was this the man who invented fast food? Louis A.M. Phelan perhaps deserves this distinction or blame for beginning the era of the fast food industry through his invention of the broaster process and by franchising the Zesto Drive-Inns which utilized the Zesto Freeze machines also invented by him. From the beginning,through inspiration and perspiration as he would recall, Louis always found a way when it was said it couldn’t be done. His list of achievements include his work with Goodyear, Monsanto, Allis Chalmers and even the Panama Canal. During the 1910’s he corroborated on over 50 patents with his friend and business partner, Clifford Hotchkiss, to develop patents for mercury switches and magnetic contactors and relays. Through these they formed the Absolute Con-Tac-Tor corporation which provided the first automatic controls and thermostats for the refrigeration industry. Through mergers with the Honeywell Corporation, his invention of the mercury switch contained in a clear evacuated tube became the standard for thermostats. He also developed an electro magnetic switch which contained a magnet housed in a clear evacuated tube which was activated by induction in order to make it more durable and open and close repetitively without wear.

In the latter part of his career he became best known for his work with the Taylor Company where he continued to innovate new processes for making soft serve ice cream and custards and new heat exchangers and condensers for the process of making confections. He utilized the Zest-O-Matic custard freezer from Taylor in his Zesto Frozen Custard stores which became Zesto Drive-Inns. At a time when Union violence was common, Phelan introduced ergonomics in the work place through music to provide a more pleasant work environment and reached out to his employees to offer a unique plan for employee involvement and ownership of his companies which became Tekni-Craft the first worker cooperative.

In 1954, right about the time Harlan Sanders, later known as the Colonel, began franchising his Fried Chicken restaurants, Phelan introduced the broasting process which combined pressure cooking and deep frying concepts to cook food faster and enhance the flavor of chicken and fish. He manufactured the new broasters by his new company, Flavor-Fast Foods which was organized by Teknicraft, the worker cooperative he began at Taylor.