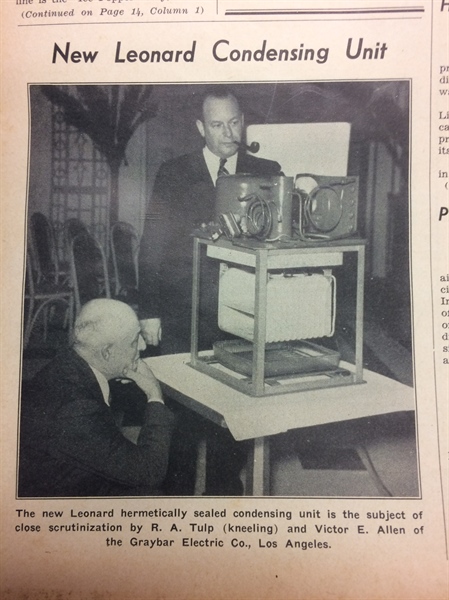 Charles Leonard, like Lord Kelvin, was always thinking of a better way. Perhaps that is why he set that pail of lard in the ice box and forgot about it as his fertile mind wandered. The anguished cry of Mrs. Leonard interrupted his thoughts and when he gazed upon her with rolling pin in hand he was reminded of the tub of lard. It had melted through the layer of ice and spilled the cooled lard and water all over the inside of the ice box cabinet. As he set about cleaning the mess up to please Mrs. Leonard he was inspired with the thought of an easier to clean ice box with removable liners and cleanable flues.

The Grand Rapids Refrigerator Co. began making the Leonard Refrigerator in 1881. In 1885 they introduced metal shelves and an improved door locking mechanism that sealed the cabinet air tight and prolonged the ice. The Leonard featured white porcelain interiors for easier cleaning and cabinets made of highly varnished carved oak with brass fixtures and enhanced with mirrors. Leonard continued producing both ice boxes and the new electric refrigerators. By 1925 Leonard was producing 1 out every 5 refrigerators made in the USA. Ironically, just prior to his death, The Leonard Refrigerator Company was merged with the company named for the man who was originally said to have thought of a better way, Kelvinator. Although Charles Leonard passed away in 1927, the Leonard name lived on through Kelvinator.

Kelvinator carried on the Leonard innovative tradition despite turbulent economic times during the 1930’s. While refrigeration continued to grow in the U.S. opportunities for growth elsewhere were hindered by extremely poor economies. In 1937, in Japan less than 4% of households had some type of mechanical refrigeration. The depressed economy made modernization completely out of reach of the average worker there. Although the economic climate was slightly better in the U.S., Engineers at Kelvinator still had to contend with risking personal harm sometimes crossing picket lines as workers sought better pay and better working conditions.

Despite these and other challenges in 1938, Kelvinator introduced their first hermetically sealed compressor condensing unit in the new Leonard Refrigerator “Glacier” model in Detroit. The compressor cylinder was placed horizontally into a cast dome with the motor stator integral to the casting. This assembly was pressed into a larger steel dome which contained the motor mounted above the cylinder and connected to the compressor by a vertical shaft. The compressor required no oil pump as it was immersed in oil at the bottom of the dome. Oil was maintained separate from the refrigeration system by the location of the compressor suction and through a centrifugal separation process in the motor rotor dome. Heat was conducted to the outside shell by metallic contact with the cylinder and the shell was cooled by the condenser fan. The split phase motor could unload and used over pressure controls.

The “Glacier” utilized a capillary tube to connect the high side float with the evaporator. This maintained the liquid line going to the evaporator above the dew point temperature to prevent sweating while also preventing flashing in the liquid line. It also prevented overloading of the motor during hot pull down after  defrost when the suction pressure was high.

The Leonard condensing unit designed by Kelvinator engineers was truly a marvel at the time and as can be seen in the photo won the admiration of luminaries in the refrigeration industry. It’s a wonder why they don’t put mirrors on refrigerators anymore.