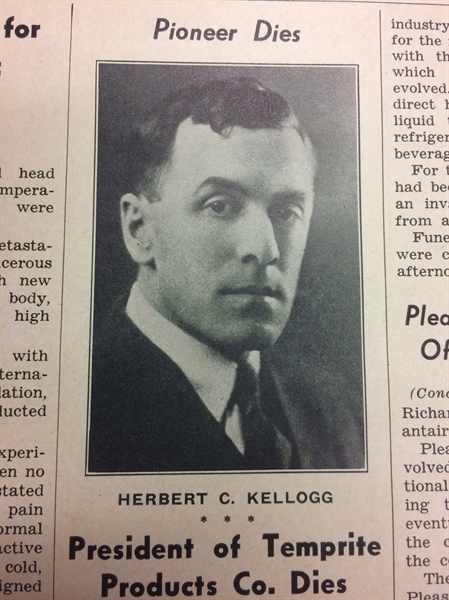 When the G.E. Monitor Top refrigerator appeared in the 1920’s it was considered to be the first to employ a hermetic compressor. At that same time though, Herbert C. Kellogg of the Liquid Cooler Corporation was also working on a unique hermetic compressor. System manufacturers recognized some of the shortcomings of using the open drive type compressor. The open drive models used a stuffing box to seal the compressor shaft but, they required maintenance and yet still were prone to leak. The seals also introduced friction which reduced the mechanical efficiency of the compressor. A hermetic design would save space and reduce friction and leaks. However, there was a concern among engineers with regard to exposing motor windings to a refrigerant. Refrigerants are great solvents and more tests were needed to ensure the reliability of the hermetic design. G.E. decided to design the Monitor Top so that the windings would never come in direct contact with the refrigerant. To do this they mounted the motor vertically above the compressor in a dome which gave the Monitor Top its’ trademark shape. Copeland would later find out the deleterious effects of refrigerant on windings in their first hermetic design known as the Pollywog. As further protection, G.E. switched to gryptal windings and Copeland also followed suit when they redesigned the Pollywog after numerous failures in the field.

Kellogg in his design circumvented all of these potential problems by eliminating the windings. Instead of an electric motor, he devised a fluid motor able to be powered as he said by city water pressure readily available to most anyone. Kellogg sought simplicity in design, his beer coolers were the first to be cooled by the immersion of the beverage coil directly in the refrigerant which made them more compact and simple and thus popular among bar owners. Besides using water pressure to compress the refrigerant it could also cool the refrigerant in the condenser. The fluid motor eased any concerns with motor windings and electrical connections.Kellogg obtained several patents for his designs in 1925 but, never put it into production. Instead, Temprite moved away from building assemblies to building components for the refrigeration industry.

Kellogg still hoped to produce Temprite Coolers with hermetic compressors but, he struggled with Arthritis. By 1931 at the height of his career, the disease overtook him making it difficult for him to work. He spent the last four years of his life as an invalid but, he remained the president of Temprite until he died at the relatively young age of 49 in 1937. The fluid motor powered hermetic design seemed to die with him as Temprite successfully transitioned into a manufacturer of refrigeration components and continue today as the major manufacturer of coalescing oil separators.

Herbert C. Kellogg served with honor overseas with the U.S. Army Tank Corps during World War I and we remember him as another one of the pioneers of the refrigeration industry.