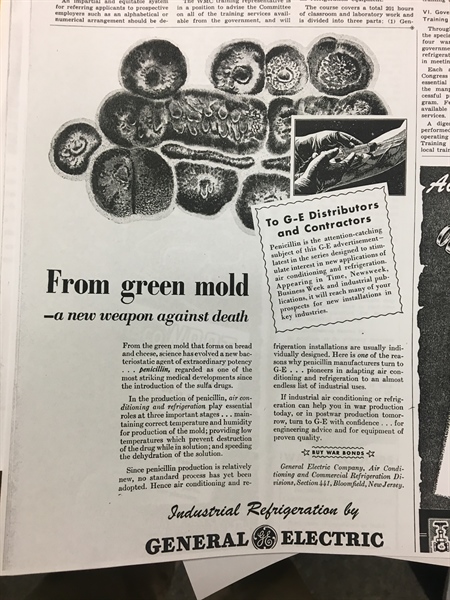 The NEWS from 1944 (The year Refrigeration Research Began)

Penicillin was discovered accidentally growing in a Petrri dish by a British scientist in 1928.  His experiment with anti-bacterial drugs to fight influenza had grown mold while he was away on vacation but as he was about to clean up the mess he had left he noticed the mold that grew in the dish had a strange effect on the bacteria. After years of experimenting with anti-bacterial drugs the natural growing mold was doing something those drugs could never do, it was dissolving the bacteria. Alexander Fleming, known as a careless lab technician by his colleagues had through his carelessness discovered the fist anti-biotics.

He wasn’t so careless though as to casually cast his discovery into the sink and wash it down the drain. Instead he began to grow mold and experiment with its’ affect on bacteria throughout the 1930’s. He developed a treatment that saved the eyesight of two small children and helped a select few others in Great Britain.

However, it wasn’t until the onset of  World War II that penicillin became readily available. Penicillin was essential in treating the wounded. It saved countless lives and limbs from amputation. The production of the drug would not have been possible without the aid of American companies including General Electric which used its’ knowledge of refrigeration to first dry the mold solution and then provide the optimum temperature and humiditty for mold growth and finally the low temperatures needed to preserve and store the drug. If it wasn’t for penicillin and refrigeration, the outcome of World War II may have been different. By the end of 1944 when Refrigeration Research began, over 650 billion units of penicillin were being produced per month. Its’ use was expanding to help combat other diseases and soon other anti-biotics were developed in a similar fashion.