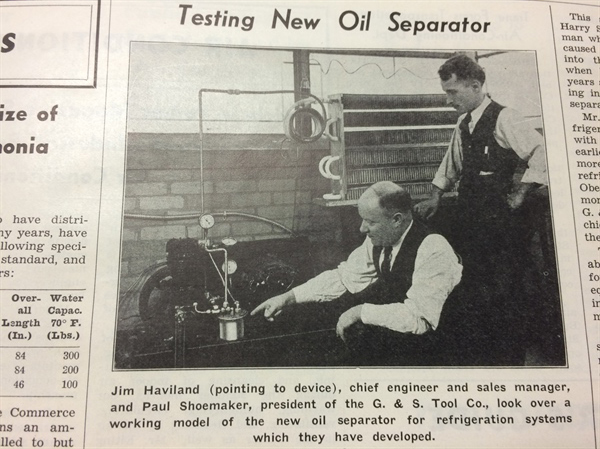 Innovations often spring forth born from problems in the field. Refrigeration service personnel have provided more than maintenance of systems in the field. They have often helped move the industry ahead with new ideas and improvements and they continue to be a vital link between the manufacturer and the consumer.

Harry Schultz was a refrigeration repairman with an idea to help his customers maintain their refrigeration equipment. He understood that oil would leak from the compressor and mix with the refrigerant in the system and he recognized the detrimental effects this caused on the capacity and the efficiency of the system. He saw first hand compressors starved with oil and condensers and evaporators logged with oil. Worse yet, he saw the damage oil caused to a compressor when it became trapped in the suction line and returned all at once in a slug. He devised a design for a device that would return the oil back to the compressor crankcase before it could travel throughout the system.

In the early 1930’s, he presented his idea to his friend Jim Haviland who had worked in the refrigeration industry for both Absopure and Nizer. He knew Haviland from when he had worked at the refrigeration supply houses of J.M. Oberc and W.C. DuComb. Haviland worked for the G & S Tool Co. in Detroit and Schultz thought they would have the resources to make his new idea. Schultz’s design used a sheet metal baffle inside a tube with a needle valve to return the oil surrounded by a fine mesh metal wire screen. The baffle separated most of the oil before it reached the screen. The screen collected the residual oil and filtered out any dirt in the system.

Unfortunately, Schultz didn’t live to see his design come to fruition. It was left to Haviland to carry it through. After Schultz’s untimely death, Haviland worked in his spare time to refine the design. Three years after Schultz’s passing, Haviland presented his idea for a prototype to Paul Shoemaker, president of the G & S Tool Co. Shoemaker named Haviland Chief Engineer and Sales Manager as they entered directly into the refrigeration products field.