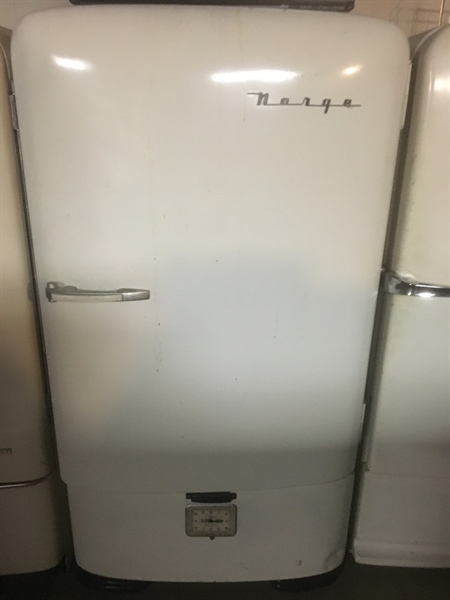 Imagine a refrigeration compressor with only three moving parts and no valves. The “Rollator” rotary compressor introduced by Norge in the 1920’s used only three moving parts submersed in oil. Like  the reciprocating compressors, it had a piston and a cylinder but instead of the piston moving up and down inside the cylinder, the piston rolled in the cylinder as it rotated. This rotary compressor based on the ancient rotary pump was introduced to the refrigeration industry in 1913 by W.S.E. Roloff in 1913.

Howard Blood, the president of Norge, utilized the rotary type compressor in the new Norge brand of electric refrigerators. They called it the “Rollator” and it ran smoother, quieter and more efficiently than the reciprocating models then on the market. The “Rollator” had no valves and since its three moving parts rotated in a bath of oil it had less friction and wear. It ran so reliably that Norge offered an unprecedented 10 year warranty on all “Rollator” models.

According to Norge, the smaller, lighter compressors offered almost three times the capacity as a similar sized reciprocating model. The smaller size left more room in the cabinet for food storage and a separate freezer compartment. At Norge, Blood focused on sleeker styling and innovation. Norge was the first to introduce automatic self defrost and a water reservoir to provide cooled drinking water. Later models had clocks or radios incorporated into the cabinet. Under the leadership of Blood, Norge became the second leading manufacturer of refrigerators. At the beginning of domestic refrigeration, many refrigeration manufacturers had ties to the auto industry and Norge based in Detroit, attracted the attention of the large automotive supplier, Borg-Warner. When Borg-Warner bought Norge, Blood convinced them to invest heavily in the appliance industry. The advice paid off during the 1930’s as the Norge Division helped Borg-Warner weather the extended economic downturn since people continued to demand well preserved food through refrigeration even as demand for automobiles waned.

Despite this part of their history, new management at Borg-Warner decided to divest from the appliance business and focus on the burgeoning automotive industry. The Norge Company was first bought by Magic Chef and then by the Maytag Corporation. Norge continued to produce the “Rollator” rotary compressors under the Maytag name even while reciprocating compressors dominated the market through technological and manufacturing improvements assisted by their close association with automotive engine manufacturers which resembled the style of the reciprocating compressors. Although the reciprocating compressors completely surpassed the “Rollator”, it opened new avenues which perhaps led to the current rotary and scroll type compressors. The Norge name faded off into obscurity until it was briefly reintroduced to the public during an infamous Saturday Night Live skit featuring comedian, actor, Dan Akroyd as a Norge refrigerator repairman. Howard Blood may have objected to Norge being the subject of the skit because he knew the “Rollators” quality and reliability so far surpassed other models that they seldom needed repair but, he wouldn’t have minded the publicity as he was always on the cutting edge of marketing and style.