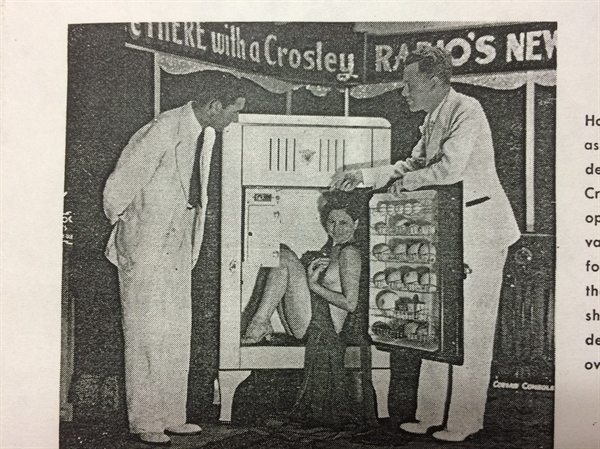 In the early 1930’s a young inventor presented his idea for adding shelves to the door of a refrigerator cabinet to all the leading manufacturers of the day. They unanimously rejected the idea as crude and tacky all except one company. Powell Crosley of the Crosley Corporation listened to the young man and liked the idea so much that he offered him 25 cents on every unit he sold. But, the young man stood firm, he was determined to get $15,000.00 cash for his idea. Crosley had built his empire by turning the radio from a novelty for the rich to a source of information and entertainment essential to every household. He recognized the refrigerator as an equally indispensable item. He tried to explain the generosity of his offer to the young inventor to no avail. Eventually, Crosley agreed to pay him the $15,000.00 for the rights to the patent.

It seemed business as usual as Crosley unveiled the 1933 radio line to their distributors at their annual meeting. They listened as sales and marketing explained their upcoming strategy with two innovations for the refrigerator division, a door with which food may be stored and the quoting of delivered prices (freight and everything else paid) about as enthusiastically as the other manufacturers did when the young inventor first pitched his idea. But, when Powell Crosley Jr. smilingly opened the door of the new 3-1/2 cu. ft refrigerator with shelves in the door a young girl stepped forth and proceeded to dance before the previously somnambulant salesman. The wide eyed salesman roared their approval standing on their chairs for a better view.

The refrigerator with shelves in the door met with no less approval among the public. Soon the Shelvador was flying off the shelves of warehouses and into homes. It made the food more easily accessible and more effectively utilized the storage space in the cabinet. Crosley held the patent for many years and sold millions of Shelvadors while some manufacturers who had previously scoffed at the idea watched with envy or sought ways to circumnavigate the patent. The Fairbanks-Morse Company introduced a model with a second door with shelves and The Philco Co. introduced a reversible door with shelves which could be opened from either the right or left. But, neither could emulate the success of the Shelvador. Crosley’s dedication to sales and service were unparalleled. Because of his success and sometimes failures in his many other endeavors Crosley remains famous in Cincinnati but, not much is known about the young inventor who received the $15,000.00 for his idea that changed the refrigerator forever.