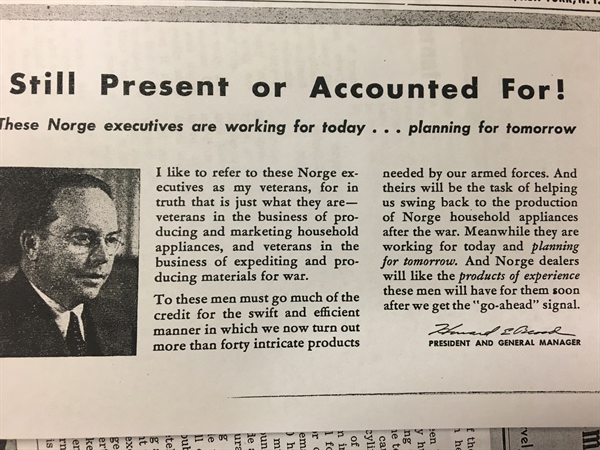 J.W. Craig, a refrigeration engineer at the Crosley Corporation made a presentation to the ASRE (American Society of Refrigeration Engineers) at the beginning of 1944, the year Refrigeration Research began. He was working on environmental test chambers for the U.S. Army Air Corps. Even then, the war was winding down and many companies were making plans for the transition from war time manufactured goods to domestic products again. But, until then, the Army needed to test electronic equipment at  -60F for higher altitude flights.

Craig thought the new refrigerant designated R-22 by ASRE would be superior to R-12 for the low temperature system because of its’ lower boiling temperature at atmospheric pressure. Since it had a higher vapor pressure at the lower temperature and the head pressure wasn’t significantly higher, R-22 would have a better compression ratio and hence better volumetric efficiency than R-12. Beyond this, the R-22 had a greater refrigerating effect and lower specific volume, all factors favoring it over R-12. These characteristics provided greater capacity out of the R-12 compressors he used without exceeding their pressure rating.

Using the same thermal expansion valves as for R-12, a curious thing happened as the system pulled down. As the temperature approached -20F, the valve slowly closed causing the suction pressure pressure to fall off rapidly till no more refrigeration was produced. To prevent the valve from closing, he decided to add 150 watt heaters to the sensing bulb. This enabled him to keep the system running and reduce the temperature to -40F but, still short of the -60F goal specified by the Army.

Craig met some resistance at the meeting. “R-22 is no replacement for R-12”, he was told by R.J. Thompson of the Kinetic Chemicals Company. Since Thompson was someone who would know a thing or two about refrigerants, he warned Craig of some of the potential draw backs of R-22. In particular, he explained that such low temperatures would cause two layer separation of the oil and the refrigerant. Thompson reminded Craig of wax separation of the oil and the myriad of problems it causes in refrigeration systems.

The valve manufacturers also weighed in. R.S. Dawson, vice president of ALCO Valve (now part of Emerson Flow Controls), let Craig know that a R-22 valve should be sized at 1.2 times the R-12 valve. He thought that would have eliminated the need for the second valve.