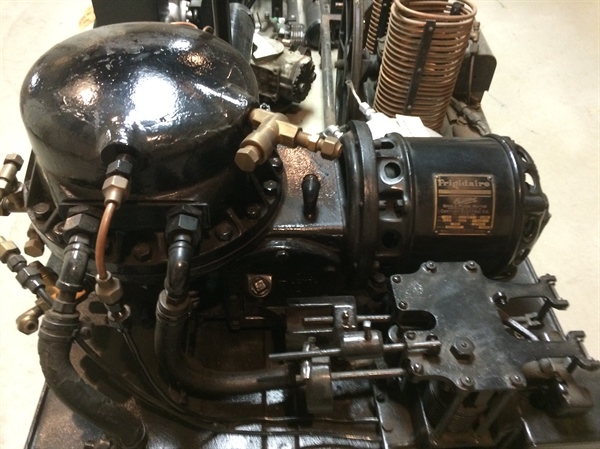 The Audiffren-Singrun “Dumbbell” refrigeration machine played a part in the development of two of the most popular domestic refrigerators, the Frigidaire and the General Electric “Monitor Top”.

Reuben Bechtold and Alfred Mellowes worked at the Fort Wayne General Electric manufacturing plant that made the Audiffren-Singrun refrigerating machines. Mellowes, an engineer, teamed with Bechtold to start their own refrigeration company. They formed the Guardian Refrigerator Company in Detroit and went to market with their first design in 1916. Like the Audiffren, a sealed dome contained both the compressor and the condenser. The water cooled plain copper coil condenser mounted in the top of the dome above the vertical two cylinder compressor. A direct drive motor attached to the side of the dome through a packed ring seal. The Guardian used cast iron material for everything including the high and low pressure controls. The small 1/4 hp motor drove the compressor which swung on a three point suspension to absorb vibration. It used sulfur dioxide refrigerant and the large size required it to locate remote from the cabinet usually outside the home.

Bechtold and Mellowes struggled to produce 30 units at a loss of $40,000.00. Fortunately, William Durant, then president of General Motors Corporation, was interested in more than just automobiles. He personally bought the Guardian Company and renamed it Frigidaire. One year later General Motors bought Frigidaire. Mellowes remained with Frigidaire as refrigeration engineer. He helped modify a lighter refrigeration machine better suited for domestic refrigeration which was developed by Fred Wolf Jr. called the “Domelre” as shown in the photo. It used mostly cast iron material and only weighed 246 lbs. Despite the name it was unrelated to the dome type design pioneered by Mellowes. Wolf’s company was also purchased by GM and the “Domelre” design became the mainstay of the early Frigidaire refrigerators.

While both Frigidaire and Kelvinator (founded by Edmund Copeland) continued to produce direct drive units, G.E. worked hard to develop a light weight hermetic design suitable for the common household. In 1925 they produced a unique truly hermetically sealed household refrigerating machine. It was called the “Monitor Top”. Its’ increasing popularity spurred both Frigidaire and Kelvinator to develop hermetic models to keep up.