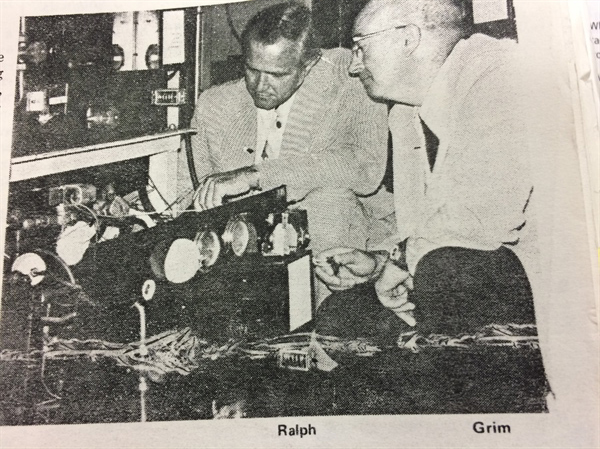 “But an accumulator is not a magic cure-all for every system refrigerant problem. On a field installed system, the selection procedure at best is a somewhat haphazard process which may not always achieve its desired effects.” So stated John Grim of Copeland. Grim John made this statement in 1975  in response to the increasing number of failures of Copeland compressors on heat pumps. The rising popularity of heat pumps during the energy crisis of early 1970’s came with a soaring increase in Copeland compressor failures. As Manager of Application Engineering, John was dispatched to find out why.

He found three distinct modes of failure and they were all due to liquid refrigerant returning to the compressor. Immediate or short term failure came from liquid slugging and was evident through broken reeds or connecting rods. Short to medium term failure from dilution of the oil resulted in bearing failure and medium to long term failure due to low superheat caused piston,ring and cylinder wear. The system needed 10 to 12 degrees of superheat to be considered dry. Contrary to common belief, there was no magic transition from wet to dry in the transition from 0 degree superheat to 1 degree superheat. The high velocity of the vapor entrained droplets of liquid refrigerant. He recommended 15 degrees superheat to prevent liquid from returning to the compressor. He thought perhaps every system should have a heat exchanger to ensure the proper superheat.

A suction accumulator is a simple device in concept but, perhaps in practice not so simple, he thought. He knew that whenever a system has trouble with oil return the first thing they blame is the suction accumulator manufacturer. Perhaps in their quest to ensure the oil return, manufacturers were over designing the size of the orifice which allowed too much liquid refrigerant to return with the oil. He knew that his suggestion for a smaller orifice would be met with much resistance since oil return was so preeminent on everyone’s mind. It would take much research and hours of testing to convince them. Only extensive testing could determine when the rate at which the refrigerant left the accumulator became critical and the easiest way he found to determine that was by measuring the temperature of the crankcase.

Using a refrigerant and oil solubility chart vs. pressure and temperature he could determine the percentage of oil dilution at various operating conditions. For example, a R-22 system with 33 psig and 10 degrees F saturated suction would have a crankcase temperature of 160 degrees F with 1% oil dilution. At the same suction pressure, a crankcase temperature of 130 F would indicate 4% dilution, 75 F would indicate 8% dilution and so on. As the oil dilution increases of course the lubrication declines. By experience and testing, he decided 8 to 10% were the limits of dilution for safe operation.

John found it hard to measure the rate at which liquid refrigerant left the accumulator. However, it was apparent that the rate of liquid flow increased as the liquid level in the accumulator increased till at the critical point the liquid left at the same rate it entered and all protection was lost. There were two common applications where the liquid level in the accumulator would be high, the heat pump and systems that utilized hot gas defrost. At low temperatures during the heating cycle of the heat pump the accumulator acted as as reservoir for the refrigerant as the compressor mass flow pumping rate decreased. Systems that used hot gas to defrost the evaporator returned the condensing liquid to the accumulator. The mounting evidence in returned compressors appeared to indicate the commercially available suction accumulators at that time struggled to protect the compressor during prolonged periods of liquid flood back on these systems. These systems needed some means to re-evaporate the liquid before it returned to the the compressor.

After more testing at Copeland, John identified the size of the orifice in the U-tube as the critical design factor. By reducing the size of the orifice in the U-tube the accumulator was able to maintain control of the liquid even under the heaviest flooded conditions yet still return the oil to the compressor under dry operating conditions. Through their work with Copeland, Refrigeration Research offered two new types of suction accumulators, the heat exchanger type with an internal heat exchanger to help re-evaporate the liquid and the heat pump type with the smaller orifice to maintain control of the liquid under flooded conditions. With the help of the Copeland test and application data, Refrigeration Research now provides better selection for field installed systems and helped make a good compressor protection device even better.