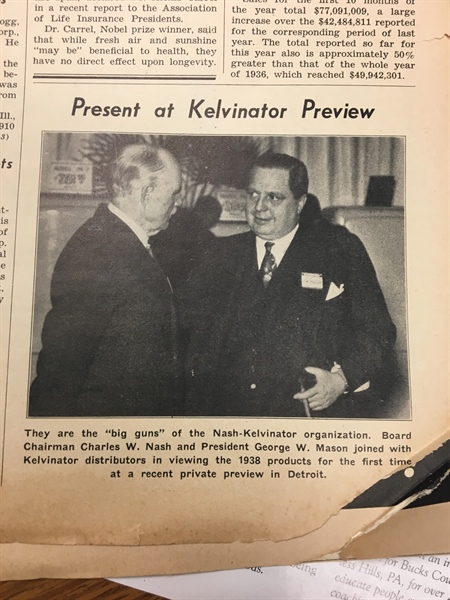 These two men, Charles Nash and George Mason left their mark on both the refrigeration industry and the automotive industry.  Nash was orphaned at the young age of 6 and sent off to Michigan to serve as an indentured servant until the age of 21. He ran away from his bond when he was 12 years old though to work as a farm hand where he learned about machinery and met his wife. The $8/month salary wasn’t enough to support him and his new bride so they moved from the farm to the city of Flint, Michigan where he went to work for William Durant at his carriage factory for $1/day. Nash’s experience on the farm helped in his new position as an upholstery stuffer and later it helped him conceive and build a conveyor system for the assembly of the carriages.

By 1910, Durant-Dort Carriage Co. was a thriving multi-million dollar business building auto bodies for the new Buick Motor Car Co., of which Durant was now President and Nash Vice President and General Mgr. Durant’s wheeling and dealings led to the formation of General Motors Corporation and the Frigidaire refrigeration company.

However it also led to his ouster at GM and the board replaced him with Nash. But, not for long as Durant managed to regain control of GM and push Nash out. Nash vowed never to work for anyone again. He started Nash motors focusing on high quality affordable vehicles. Through his careful management they forged a niche amidst the other giants in the auto industry.

Nash looked for someone who could some day replace him. He admired George Mason at Kelvinator. Mason combined his superb engineering skills with a keen business sense to turn fledgling Kelvinator into a refrigeration powerhouse second only to Frigidaire in the refrigeration industry. Mason was a gentle giant with a generous and calm demeanor which belied his market sense.

Born in North Dakota, he had grown up in the auto industry supporting himself and paying for his tuition at the University of Michigan by working in garages. However, he had found his home at Kelvinator and would not leave so, Nash bought Kelvinator and thus began Nash-Kelvinator.

Mason rekindled his love of automobiles. Paradoxically, the large man focused on fuel efficient smaller cars long before they eventually became so prevalent.

Nash-Kelvinator eventually sold out to American Motors and Mason turned to his love of the outdoors. He became president of Ducks Unlimited and enjoyed hunting and fishing in Northern Michigan on his land along the Au Sable River which he ironically purchased from the son of William Durant after the estate they were building there burned to the ground. After his death he bequeathed the land to the State with the promise that it remain a natural area open to the public which it remains to this day.