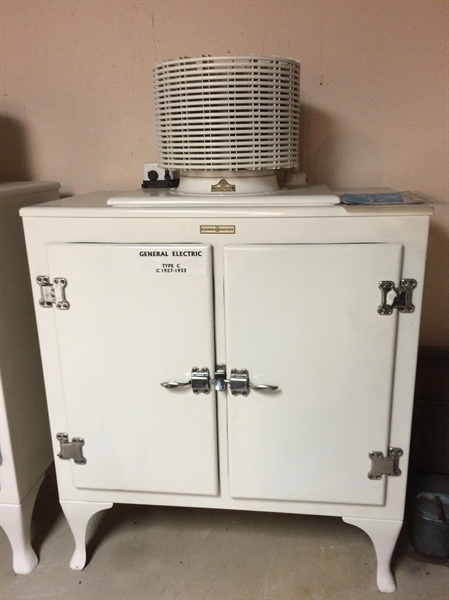 Clark Orr, a GE senior engineer at the GE Center for Innovation in Schenectady, NY, borrowed  from the Audiffren Dumbbell refrigerating machine which GE manufactured in Fort Wayne, IN to develop the first hermetically sealed household refrigerating machine. Encouraged by Walter Goll and P.C. Morganthaler, the Fort Wayne Works manager and assistant manager, Orr endeavored to develop the first refrigerating machine for the common household. Similar to the new sewing machines, washing machines and vacuum cleaners, the homeowner would merely need to clear a space for the unit and plug it in. He placed the compressor inside a vertical cylinder surrounded by a helix of finned tubing. This condensing unit mounted on the top of the cabinet creating a very unique and modern looking shape which became known as the “Monitor Top”.

The first model, the OC-2, used a copper evaporator coil inside of a brine tank. The brine tank went in the same place as the block of ice would have gone inside the cabinet to cool the conditioned space. The 12 gallon brine tank was charged with 24 lbs. of salt while the evaporator coil was charged with sulfur dioxide refrigerant. Although slightly toxic, sulfur dioxide was considered a safe and highly stable low pressure refrigerant alternative to ammonia. Its’ sharp penetrating odor is not easily forgotten as it caused watering of the eyes and severe coughing. Despite this, some thought that at low exposures it might cure the common cold. In this case, the cure was surely worse than the disease. The smell made a leak easily determined and by spraying the leak with ammonia, a dense white cloud of ammonium sulfide would form to pinpoint the exact location.

The brine tank installation proved more difficult though. The installing technicians needed to mix the brine solution on site. Typically, they used a standard wash tub to mix the solution. But, since the wash tub capacity was less than 12 gallons, the installers would fill the tub with 6 gallons of water and mix in the salt until it was completely dissolved. They emptied this mixture into the tank and added six more gallons to the tub and the rest of the salt then added that mixture to the brine tank. Since 6 gallons of water can dissolve 15 lbs. of salt, that left only 9 lbs. of salt for the second 6 gallon mixture. When the less dense mixture was added to the top of the brine tank it didn’t mix with heavier mixture below. So, the brine tank formed two layers of density and consequently two temperature layers. The copper evaporator coil quickly cooled the top layer forming thick layers of frost while it struggled to cool the lower denser layer which merely formed beads of condensation which dripped into the defrost pan.

The ice trays which were located by the lower portion of the tank barely managed to produce any ice. It took the first sales representative of the product, Mr. William Holladay, to solve this problem. He recognized the error of the installers and changed the installation instructions to mix the water and the salt in equal proportions, 2 lbs. of salt per one gallon of water. The stratification disappeared and henceforth he became known as the brine expert.

Orr also devised an ingenious evaporator pressure regulator to prevent motor overload during a hot pull down. A bimetallic strip opened and closed the valve in the suction line in response to the temperature. Unfortunately, sulfur dioxide and moisture react to form corrosive sulfuric acid. The equipment at that time was incapable of removing all of the moisture from the system so, the valves eventually froze in the closed position. This caused excessive suction line pressure drop which severely reduced the unit capacity.

The DR-2 (Domestic Refrigerator) replaced the OC-2. It had a gleaming white porcelain enamel finish and that thing on the top which was first called the “Monitor Top” on this model. The DR-2 was soon replaced by the CK model which was the greatest Monitor Top of them all. It had no problems and was much more efficient with an average energy consumption of 20 kwh per month compared to 50 kwh for the DR-2. It still used sulfur dioxide but switched to a stainless steel evaporator with a single header. Tests revealed that it used much less energy than any of its’ competitors which was very important during the years of the Great Depression. Visit the gallery for photos of the Monitor Top Refrigerators.