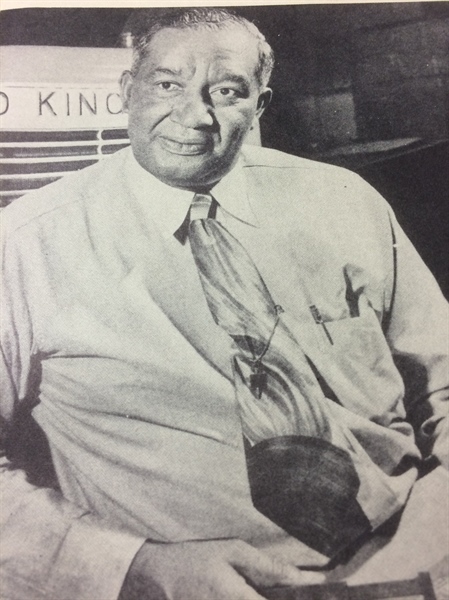 In the 1930’s meat and produce was moved from farm to market by trailer and cooled by ice. The trip and the cargo space was limited by the amount of ice and the cooling it could provide. Transport posed many challenges that stationary units could not withstand. In particular, jarring vibration travelling over the road quickly fatigued lines and shattered other parts of the system. It also required a portable source of power capable of driving the compressor. Freight companies complained of the limitation of ice and farmers lost product due to spoilage but, no one had designed a durable unit capable of reliably replacing blocks of ice. That is until a game of golf with Joe Numero, president of Cinema Supplies Inc., Harry Werner, President of Werner Transportation Co. and Al Fineberg, President of the United States Air Conditioning Co.Harry received a call that day regarding one of his transport trucks that had delivered a spoiled load of poultry because the ice and salt could not withstand the heat load caused by the hot summer sun.

Harry asked Al, the air conditioning expert, why it was that they could air condition movie houses like the ones Numero supplied but they couldn’t condition the air in a trailer. Fineberg tried to explain to Werner the vibration caused in transport and the need for a source of power while Numero listened. Despite his lack of refrigeration knowledge, Numero teased that he could make a refrigerated trailer if Fineberg could not. Fineberg scoffed at Numero’s boast but, he didn’t know that Joe Numero had a man that worked for him that thrived at doing things that couldn’t be done.

Fred Jones had been told it couldn’t be done his whole life but, he always found a way.  Fred was born in 1893 in Covington, Kentucky to a white father and a black mother and abandoned at an early age. Left to find his own way in life he came of age at the same time as the automobile which piqued the interest of his keen mind for all things mechanical or electrical. By age 15, he was already the chief mechanic at a garage in Cincinnati. Although his formal education ended at the fourth grade he used his reading ability to learn everything he could by reading manuals and whatever material he could find.

Fred was told he couldn’t be a race car driver because he was too young or pilot a steam boat because of his race or that he couldn’t make a commercial sound-movie machine for a talking picture but, he did all these things and more. Numero and Werner explained to Fred what they needed for the trailer and he set to work. He understood the challenges caused by vibration and used his experience from building race cars to withstand intense vibrations to design his refrigeration unit. He used the local library to study everything he could on refrigeration. The units proposed up to that time all used regular electric refrigeration that would need to be plugged in periodically to electrical hook ups. But, Fred’s design called for a four cylinder gasoline engine to drive the compressor. He also built a starter/generator flywheel to start and stop the engine automatically and to operate the thermostat to control the temperature inside the trailer.

The first models were large and heavy. Since Fred didn’t want to use valuable cargo space, he mounted the unit outside underneath the trailer. After testing, Fred realized that  the current position exposed the unit to mud and other hazards of the roadway. So he moved the unit to the top front of the trailer exactly where they can be found today. This location improved the performance. Fred continued to refine the design by making it lighter and more efficient. It became so successful that Numero decided to sell his company and start the United States Thermo-Control Company. They called the first units Thermotrol but later changed it to Thermo King which they also eventually changed to the company name. Fred proved his doubters wrong because one man, Joe Numero, believed in him.