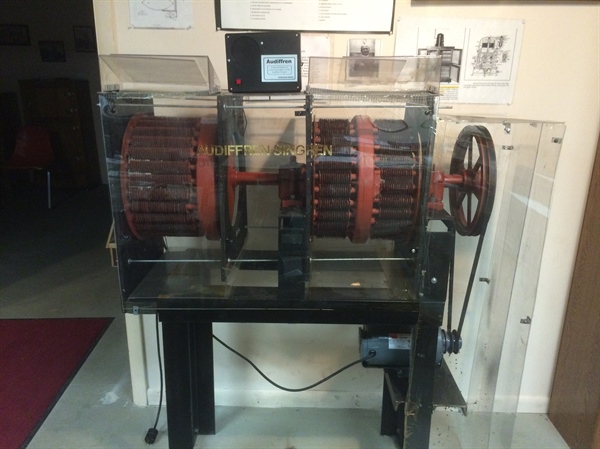 A French monk in response to the need for more reliable cooling at wineries invented a hermetically sealed system which later became the model for the first hermetic systems used for household refrigerators by General Electric, Frigidaire and other manufacturers. Abbe Audiffren taught Physics at the Seminary and he applied his knowledge and his mechanical aptitude to develop a unit like shown in the photo which resembled a dumbbell. The dumbbell consisted of two nearly spherical chambers. The larger chamber contained the compressor and the condenser while the smaller served as the evaporator. A shaft of a pipe within a pipe connected the two chambers. The compressor block hung on the the shaft inside the larger bell. An eccentric attached to the rotating shaft drove a reciprocating piston and an oscillating cylinder up and down while a counter weight kept the compressor block from rotating unless high pressure developed then the entire block would rotate with the shaft to prevent further rise in pressure.

The cylinder controlled the flow of refrigerant by moving back and forth on a highly polished plate alternately exposing and covering a port. As the sulphur dioxide was discharged into the chamber, centrifugal force flung the refrigerant to the shell of the rotating chamber where it condensed into liquid. A scoop on the shell collected the liquid and stored it in the  high side float assembly. The oil which floated on top of the refrigerant in the high side float reservoir overflowed into the oil reservoir where it was fed back to the eccentric and piston assembly. The liquid refrigerant was fed through the inner pipe of the shaft and expanded through the throttling valve as it entered the evaporating ball where the refrigerant vaporized as the partially submerged ball absorbed heat from the brine solution. The vapor returned through the space between the two pipes. Centrifugal force closed  the valve between the high and low side and opened to equalize the pressure when the rotation stopped.

The Dumbbell was supported by bearings in two places, on the compressor end where the shaft extended out to the hand crank or the the belt driven pulley and in the center between the two balls. The bouyancy of the partially submerged chambers considerably reduced the load on the bearings. The overall design proved extremely durable.

In 1894, Audiffren obtained patents in Europe and the United States. He joined with French businessman Henri Singrun to produce models ranging in size from 635 btu/hr to 15,000 btu/hr. By 1904 he obtained another US patent and hoped to crack the US commercial market. The H.W. Johns-Manville Company acquired the rights to the Audiffren-Singrun for the United States market and they contracted the General Electric Company to manufacture the Dumbbell in 1910. They were first used principally for cooling milk in dairies. General Electric then made modifications to the design to develop the first truly hermetic domestic refrigerator which came to be called the “Monitor Top”.

The original Dumbbell design became popular as a roof top unit because they were much lighter than the ammonia units in use at the time and they could be safely installed on the roofs of tall buildings. But, by the 1940’s lighter less expensive refrigeration equipment replaced the “Dumbbell” and Audiffren-Singrun ceased manufacture. Still, there were some Dumbbells on rooftops operating as late as the 1960’s like the unit shown in the photo.