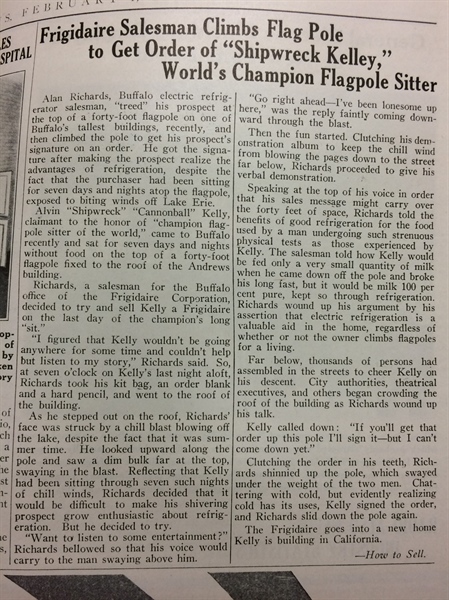 How far would you go to complete a sale? Well, in the case of Alan Richards, to the top of one of the tallest buildings in Buffalo and then another 40 feet to reach Alvin “Shipwreck” Kelly perched on top of a flagpole in the Summer of 1927.

Kelly had made quite a name for himself in the 1920’s starting the fad of flag pole sitting of which he was the grand champion having set on a pole in Baltimore through rain, wind and storms for a record setting 49 days subsisting as he put it on cigarettes and coffee. So, when Richards found him in his accustomed position on a pole in Buffalo he thought of a stunt to bring publicity to Frigidaire with his famous sale. He found “Shipwreck” in good spirits having only been up there for a mere 7 days and receptive to his sales pitch. “Shipwreck” flush with his profits from his stunts was more than willing to sign the order for a new domestic refrigerator to use during those times when he came back to earth.

The rest of the story is told in the article. Like so many others, “Shipwreck’s” fortunes came crashing down with the market in 1929. Flagpole sitting fell out of favor with the viewing public, ” I guess folks didn’t care so much to see someone perched up so much higher than their portfolios”, he is thought to have said. Frigidaire was fortunate to weather the depression and electric refrigeration was here to stay.