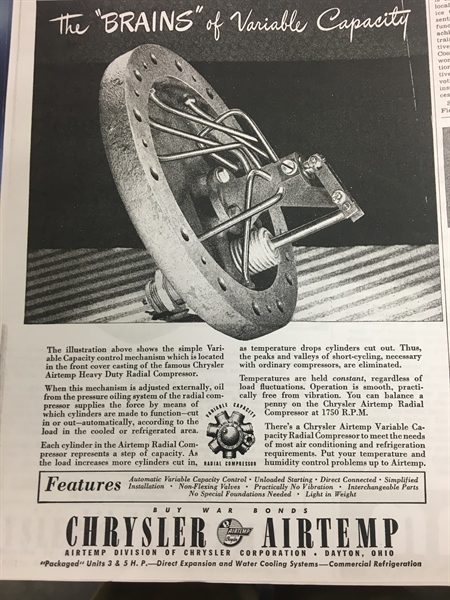 It was a time of rationing; steel, gasoline even meat. Everything and everyone sacrificed to help in whatever way they could to support the men and women in uniform. Everyone made their best effort since their fathers,mothers,husbands, wives, sons and daughters lives depended on them. In 1944, Refrigeration Research began also to make small parts for the military but primarily it began as a company to repair refrigerators for domestic use since at that time no new refrigerators were available to the general public.

Although all manufacturing was mobilized for the war effort that didn’t mean everything was converted to making planes, tanks or weapons. Refrigeration and air conditioning played a prominent subservient role. Refrigeration was crucial for preserving food for hungry troops on land, sea and in the air. Refrigeration preserved serums and blood supplies for the wounded and air conditioning provided the atmosphere for machining sensitive metal surfaces and measuring precise parts for aircraft and by removing humidity to prevent corrosion during processing. Refrigeration also cooled fluids for spot welders and cutting fluids for various machining processes.

Chrysler Airtemp created a radial compressor design which was inspired by and resembled the radial aircraft engines used in the war. The Airtemp radial compressor was much quieter than the aircraft engines. Chrysler bragged that the balanced radial design made them so smooth you could balance a penny on them. But, their best and most important feature was the unique automatic capacity control.

The automatic capacity control mechanism utilized the hydraulic force of oil under pressure in the crankcase of the compressor to close off or open up cylinders in response to the cooling load. This eliminated short cycling and improved the efficiency and the performance of the system. It  enabled more precise control of the temperature in the conditioned space which was important for research, surgical rooms, machining and measuring engine aircraft components.

After the war Airtemp focused mainly on supporting their parent automotive company Chrysler Corporation through developing automotive air conditioning. Their first systems were bulky and only available on the luxury models like the Chrysler Imperial and the radial compressor gave way to the more conventional compressor designs the same way as the aircraft radial engines were superceded by the jet turbine engine.