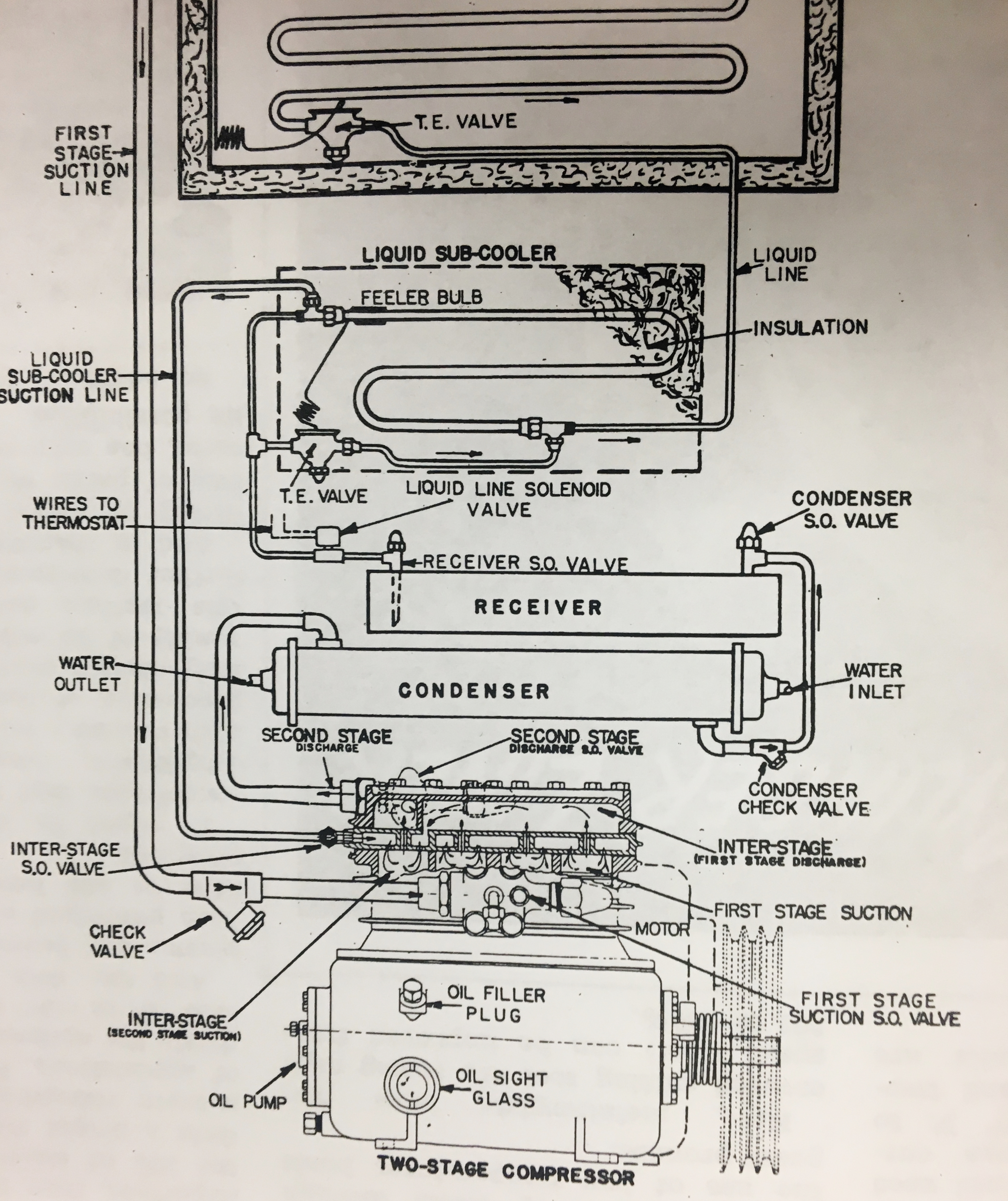 During the second World War there was an urgent need for low temperature refrigeration to simulate high altitude to test flight instruments for bombers and fighter aircraft. Low temperature refrigeration also helped metallurgists develop strong light weight aluminum alloys to withstand the strain of combat speeds and maneuvers. It helped with advances in the processing of blood plasma and the production of penicillin too.  Prior to the war, there wasn’t much application for refrigeration temperatures -70F and below so manufacturers had little experience developing and producing these low temp systems.

Because of the high compression ratios needed to achieve the low evaporator temperature a single stage compressor was not capable of producing these low temperatures. Manufacturers, like Servel, who produced these systems used either cascade systems or multistage compressors. Servel preferred the multistage approach because it simplified the system by allowing the use of one type of refrigerant in one system. The urgency of the war led them to take risks in development and production they might not have otherwise considered.

A compression ratio of 5:1 is considered optimum but in single stage condensing units capable of maintaining -40F for ice cream cabinets a 15:1 ratio was common. In the Servel system, the compressor in the first stage discharged into the suction of the second stage in the interstage portion of the compressor. By raising the pressure in steps, the compression ratios were reduced to less than 5:1 for greater efficiency and capacity. Still, as in single stage compression, reduction of the clearance volume was important to improve the volumetric efficiency and capacity. Fortunately, improvements in machining and metallurgy during the war effort also helped in reducing the clearance volumes.

A two stage system was capable of producing -75F. In order to get lower temperatures, the compression needed to divide into three steps in a three stage condensing unit. To reach -94F the first two stages maintained the less than 5:1 ratio but the third stage slightly exceeded 5:1. Servel Engineers found that subcooling heat exchangers were vital for removing heat from the liquid before entering the expansion device to optimize the refrigeration effect to reach and maintain the lower temperatures.

Servel warned that it was necessary to avoid undue pressure drop in the evaporator and the suction line. They found as little as two pounds pressure drop could reduce the capacity by 40%. By 1944, they looked forward to peace time and further applications for their low temperature systems. Refrigeration Research is remembering 1944 the year of its founding to celebrate 75 years in the refrigeration industry.