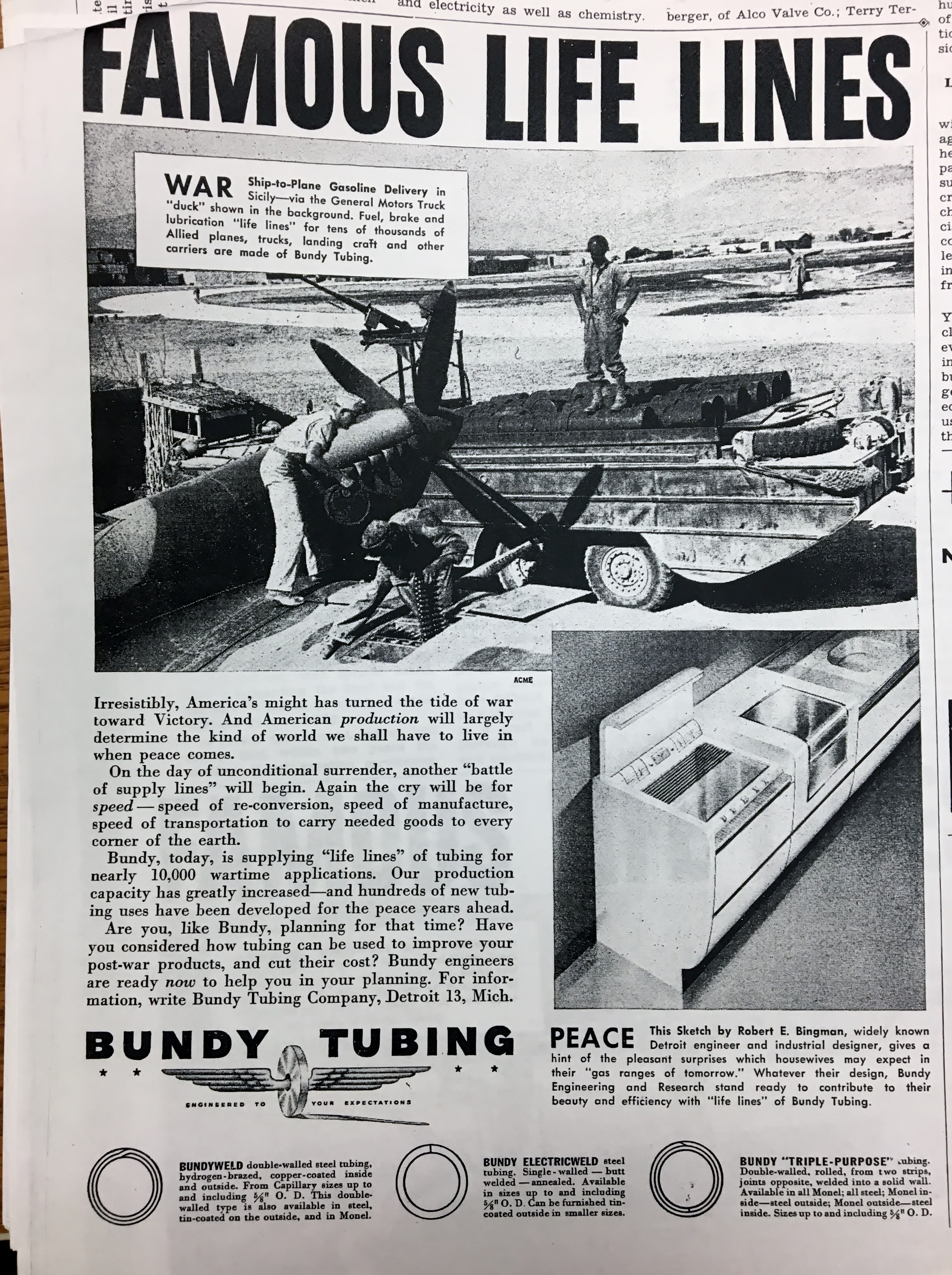 Bundy tubing has been a staple of both the automotive and refrigeration industries from their inception. It began when Harry Bundy, a former mechanic at Detroit Steel Products, developed a process for forming a double wall steel tube capable of withstanding extreme high pressures.

The first contract Harry received was a big one with the Ford Motor Company. Henry Ford needed someone to make the gas lines for the Model T. At that time in 1920, the Model T accounted for roughly half the cars on the road world wide. Bundy double wound his tubes from a single strip and brazed the seam. He provided the tubes to Ford in straight lengths. But, when the Ford workers bent and shaped the tubes to fit the Model T chassis, the brazed seam split rendering the tubes useless.  Needless to say Henry was not happy.

Undaunted, Harry went to work on fixing the problem. He decided to coat the tube with copper before rolling the sheet around itself twice and then brazing the tube in a hydrogen atmosphere brazing furnace. This made the tube more resistant to shear as it was formed. It also made the tube more corrosion resistant and cleansed the interior and exterior surfaces. Bundy went one step  further, he didn’t leave the bending and the shaping to Ford but instead supplied the tube pre-bent according to the Ford specifications. This arrangement with Ford facilitated their assembly process and it became the relationship model for future automotive suppliers. Ford began to rely on the expertise of their suppliers to feed their modern assembly line process.

After his success with Ford, the “Bundy Weld” tube quickly found new applications in brake lines, hydraulic lines and all manner of refrigeration condensers and heat exchangers. Bundy tubing boomed and even during the depression era years it continued to supply millions of feet of tubing to the automotive fleet which had expanded to 2.8 million vehicles by 1930 while also supplying the growing refrigeration industry which accounted for fully 1/3 of their sales.

At the start of World War II, Bundy completely committed to the war effort by dedicating all of their production to supply the military. At the time of the beginning of Refrigeration Research in 1944, Bundy was still supplying fuel  lines, brake lines and brake lubrication lines for tens of thousands of Allied planes, trucks, landing craft and carriers. Bundy Tube was the life line of the Allied Forces as described in the ad from the Refrigeration News in 1944. Bundy Tube and American Engineering and production helped turn the tide of the war.